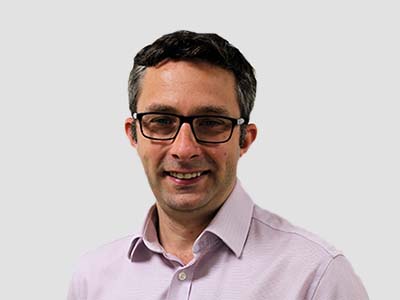 Dr Russell Banner is a Consultant Clinical Oncologist based in South Wales. His undergraduate training was at Christ’s College, Cambridge and then at Guy’s, Kings and St. Thomas’ Medical School in London, qualifying in 2002. He trained as a junior doctor in London and became convinced of a career in Clinical Oncology after working for 6 months in the Royal Marsden Hospital.

He started his speciality training in Canterbury in 2007 and then transferred to complete his training in South Wales gaining Fellowship of the Royal College of Radiologists in 2010. He undertook an Advanced Radiotherapy Clinical Research Fellowship at Velindre Cancer Centre in 2011 and completed his MSc with the Institute of Cancer Research in London in 2013 researching Human Papilloma Virus specific T-cell immune responses before and after chemoradiotherapy for oropharyngeal cancer.

Russell currently specialises in tumour sites for head & neck cancers. He is trained in the use of proton beam therapy and looks forward to developing an evidence base for this treatment type, in looking at the benefits of using it to treat these specific types of cancers.

Russell was born in London, though his mother ensured that his first rugby shirt was Welsh! He has a love for Southern Africa having spent a year working there in the mid-1990’s and returns whenever he gets the opportunity. He is now happily settled in South Wales with his wife and children.

This consultant has received training from the Rutherford Cancer Centres in the delivery of proton beam therapy. The programme, Proton Therapy Clinical Education, in conjunction with The Perelman School of Medicine at the University of Pennsylvania and IBA, the leading proton beam therapy solutions manufacturer, involves oncologists gaining practical experience in Penn’s Roberts Proton Therapy Center – one of the world’s leading centres of proton therapy research and expertise.