When it comes to treating cancer, we know that approximately 50% of cancer patients will undergo radiotherapy treatment. However, the method in which they receive this, in terms of type, time and dose, is constantly changing.

Every day, we, as clinicians and healthcare professionals, innovate. Whether that be something big or small, like developing a completely new drug or technology or perhaps it is simply altering tried and tested methods in treatment planning, we are always looking for ways to improve our capacity to treat and ultimately cure.

In recent years, the demand for proton beam therapy – a specialised form of radiotherapy – has surged, positioning the UK as a key provider of this advanced treatment. In contrast to conventional radiotherapy using X-ray beams, proton beam therapy delivers beams of protons which are more targeted to reduce damage to peripheral tissue and organs. In its simplest form, its high precision and ability to stop the beam at a defined point means that it can dramatically reduce long-term side effects in some cases.

The capacity to treat patients with high-energy proton beam therapy in the UK has gone from zero just three years ago to being capable of treating thousands of patients, with the Rutherford Cancer Centres now the biggest provider in the country, and a European leader. The NHS has one centre open in Manchester and another opening next year at UCLH in London. We got to that point through innovation. Proton beam therapy is by no means a panacea for all cancers, but it is an excellent treatment for many patients. In recent years, proton beam therapy has radically changed how we treat cancer.

More recently within this space, the UK has been leading the international community in how we deliver proton beam therapy. Based on new clinical evidence for the treatment of prostate and breast cancers, Rutherford has introduced a technique known as hypofractionation – the process of delivering higher doses of radiation per fraction and using fewer daily fractions – which means we are able to vastly reduce the overall duration of treatment for patients. As a result, we can gain the benefits of proton beam therapy whilst making the whole experience easier for patients, mentally and physically.

The technique itself is not new. Hypofractionation is commonly used for conventional radiotherapy under the NHS and in cancer centres around the world. In fact, the NHS has been a world leader in the use of hypofractionation for conventional radiotherapy in the treatment of breast and prostate cancer. By combining this method with proton beam therapy, and taking advantage of the improvements made in imaging, in some prostate cancers we have been able to successfully cut down a treatment plan which would traditionally have consisted of 37 sessions over seven and a half weeks to just seven sessions over two and a half weeks.

In a breakthrough in the treatment of some breast cancers by using hypofractionation, we can potentially cut the standard treatment plan of 25 fractions over five weeks to just five fractions over a week. 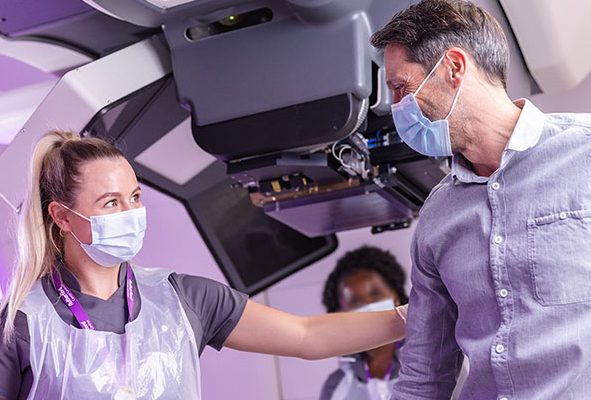 Making the UK an innovation leader for cancer care

Currently, we are the only network of centres in the world to use that regime for proton beam therapy. In recent years, proton beam therapy has radically changed how we treat cancer. By increasing our capacity and developing new delivery methods, we can push and position the UK as a leader in the innovation in cancer care.

The Rutherford Cancer Centres are at the forefront of particle therapy and precision radiotherapy research and development, working with some of the world’s top academic institutions and advanced medical technology providers. By working collaboratively with public and independent healthcare providers, we can make advanced cancer therapies such as proton beam therapy more accessible to those who need them.