A cancer patient from Edinburgh is one of the first in the world to be treated with a new delivery technique for proton beam therapy, which is a specialised form of radiotherapy, known as hypofractionation.

Based on new clinical evidence for the treatment of prostate cancer, the Rutherford Cancer Centres – the UK’s biggest provider of proton beam therapy – has adopted hypofractionation which is the process of delivering higher doses of radiation per fraction and using fewer daily fractions to vastly reduce the overall duration of treatment for patients.

John RT Carson, a 73-year-old chartered civil engineer from Edinburgh, was diagnosed with prostate cancer in June this year after being alerted following a bi-annual test at his GP to measure the levels of prostate-specific antigen, PSA, in his blood. Following a high reading, Mr Carson was sent for an internal examination which established that he had a tumour on his prostate.

Mr Carson said: “From there I had a biopsy which took samples of the prostate, an MRI scan and a full bone scan, all in Western General Hospital in Edinburgh. I meet with the clinicians who did the biopsy to be told I have prostate cancer and it was seven on the Gleeson Scale.”

Mr Carson was referred to the Oncology Department of the Western General and was put on a year’s course of hormone treatment to shrink the tumour and was advised he would need an intensive course of radiotherapy through the NHS which would include 21 daily visits, and would then be followed by brachytherapy. The radiotherapy was scheduled to begin in February 2022. Another treatment option was to have his prostate removed, which Mr Carson instantly refused.

After learning about the potential side effects of radiotherapy, he searched the internet for alternatives and discovered proton beam therapy – a type of radiotherapy which delivers beams of protons that are more targeted and reduces damage to peripheral tissue and organs. 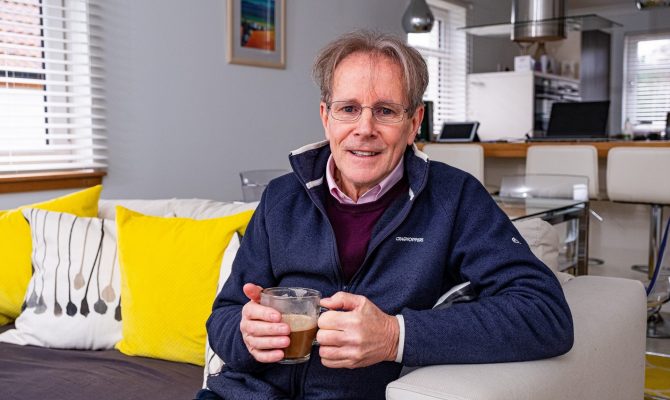 Mr Carson said: “I did a lot of my own research – I was concerned about my quality of life after treatment. Because of where the prostate is situated, radiation can have a long-term impact on the bowel and rectum, causing issues such as incontinence and more. I wasn’t convinced that this was my only option. When I learned about what proton beam therapy was I immediately wanted to know more, and initially thought it was something I’d have to travel abroad for. The fact I could just travel to Northumberland made it much easier.”

Once Mr Carson contacted The Rutherford Cancer Centre North East, he spoke with an oncologist and was made aware of new clinical evidence which had emerged from the use of hypofractionation which could treat his cancer in seven sessions over the course of two and a half weeks. By comparison, a treatment plan under the NHS for conventional radiotherapy normally consists of 37 sessions over seven and a half weeks.

The technique of hypofractionation is commonly used for conventional radiotherapy under the NHS and in cancer centres around the world. It however has become a newly adopted technique in the delivery of proton beam therapy.

In September this year Mr Carson was treated with seven hyper-fractions spaced out over a three-week period at the Rutherford’s centre in Northumberland. Mr Carson was fitted with a spacer prior to his treatment commencing to further reduce the amount of radiation that would be able to pass through his prostate and damage surrounding organs during treatment.

The Rutherford’s network consists of four centres in Newport, Reading, Bedlington and Liverpool, three of which currently have interconnected proton beam machines with a fourth expected to come on stream soon, drawing patients from all over the UK via 170 referring oncologists.

Professor Sikora said: “The results of using this technique when delivering proton beam therapy has shown some very promising results, with little side effects. By increasing the intensity of each fraction, we are able to reduce the number of sessions required which means patients are less likely to experience short-term side effects, they spend less time in hospital, and they can finish their course of treatment sooner.”

Mr Carson added: “I am now over two months post-treatment and I feel great. Had I waited to go down the NHS route, I wouldn’t have been starting my treatment until February next year. I’m so glad I found out about what proton therapy could do for me, and that I was able to be treated immediately.

“The time saving aspect of the treatment I received was so important. Having cancer takes over your life and I am a pretty determined person. By being able to access treatment so quickly gave me the determination and will to go on and fight.”

Prostate cancer is the most common and biggest killer of cancer in men in the UK, with one in eight men being diagnosed in their lifetime.

According to the latest statistics, prostate cancer has been the worst affected by the pandemic, with confirmed cases in England down by almost a quarter. Ministers have warned that the numbers will get “worse before they get better”.

Professor Sikora added: “Our worst fears about a significant build-up of cancer cases due to Covid-19 have now become a reality. We must rise to the challenge once more to ramp up screening, diagnosis and treatment. It is crucial that we do not allow this backlog to feed a new cycle of delays and waiting times in cancer care that lasts for many months if not years. This would be hugely damaging for patient outcomes and will place considerable strain on cancer services for a long time.”

In the UK, there is currently no national screening programme for prostate cancer. Men who are over the age of 50 can ask their GPs for a PSA test, but this is rare due to the stress that GP surgeries are under, which has been worsened due to the drop in face-to-face consultations since the impact of Covid-19, as well as a lack of general awareness among men.